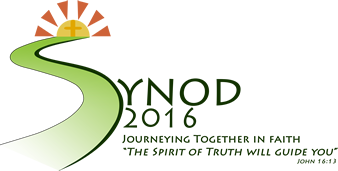 Following an extensive period of consultation and report, as conducted by all 60 parishes and by 25 other groups in the Diocese of Limerick, a shortlist of twelve themes was compiled.

These themes, which had emerged from a huge collection of data, were presented to Synod delegates in October of 2015, during a day-long meeting of reflection and discernment.

The following six themes were selected, by a voting process, for consideration at the Limerick Diocesan Synod in April of 2016.

While this meant that another six themes were omitted, in an effort to ensure sufficient consideration of the six selected, many of the topics listed under the other themes arose, to some extent, under those selected.  There was much overlap in classification of the opinions and concerns which were expressed by the people.

Community & Sense of Belonging included such topics as how to build communities; declining numbers in communities; encouraging volunteerism; caring for others; stimulating social gatherings.

Faith Formation, Education & Catechesis addressed the question of reconciling Church teaching with the reality of living; adult faith formation; links between home, school and parish; Religious Education in our schools.

Pastoral Care of the Family included such areas of concern as the role of parents and guardians in passing on the faith; separation and divorce; second relationships; caring for children, equality issues.

In the theme, New Models of Pastoral Leadership, the Synod addressed the imminent shortage of clergy; the fall in vocations; the role of women in the Church; issues of governance and communications.

Under the heading, Liturgy & Life, delegates considered how we pray as Church; how this connects with daily life; more meaningful and joyful liturgy; music and creativity in liturgy.

The sixth and final theme was Young People and here the engagement and empowerment of young people was a major concern.  The disenfranchisement of young people, their negative experience of Mass and their competing interests were also addressed.